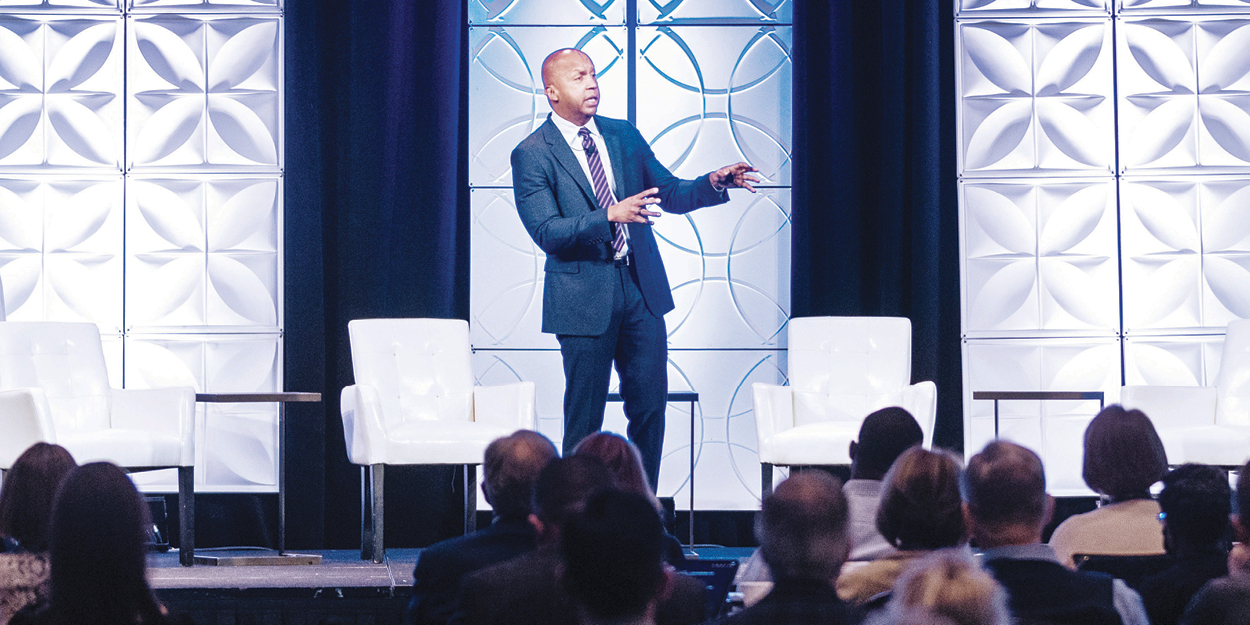 The Redemptive Power of Truth Telling

Bryan Stevenson is the founder and executive director of the Equal Justice Initiative (EJI), a human rights organization in Montgomery, Alabama, as well as the bestselling author of Just Mercy and a professor of law at the New York University School of Law. He is also a graduate of Eastern University, a CCCU institution in St. Davids, Pennsylvania. He gave a plenary talk from the main stage of the 2022 CCCU International Forum called “American Injustice: Mercy, Humanity, and Making a Difference,” from which this essay is adapted.

I believe doing justice requires us to change narratives. Our faith actually allows us to see ourselves differently when we understand what redemption can do, what compassion can do. And our world, our community, our nation needs us to change some of the narratives that are out there. We have the highest rate of incarceration in the world because 50 years ago, we had politicians that were preaching what I call the politics of fear and anger. They said that people who are drug-addicted and drug-dependent are criminals, and we have to put them in jails and prisons. Now, they could have said that people suffering from addiction and dependency have a health problem, and we need a healthcare response to that population. But they didn’t say that, and we allowed ourselves to be governed by fear and anger.

I see the resurgence of a lot of that politics of fear and anger today, and I just want to be a witness that we are called to not be led by fear and anger. When you are governed by fear and anger, you tolerate things you should never tolerate. You accept things you should never accept. Go anywhere in the world where people are being abused or mistreated, persecuted because of their faith, denied basic services because of their ethnicity. If you go to these places and you ask the perpetrators of that violence and abuse why they do what they do, they can give you a narrative that will sound like fear and anger.

We have to challenge these narratives. We are called to be witnesses of God’s hope and grace, and that is the challenge that we have to face. I’ve seen what the narrative of fear and anger is doing in our society, and too often, I believe our churches have been silent when we need to lift our voices. We’ve allowed these narratives to emerge that some people are beyond the grace of God; that some kids are not God’s kids. We have got to change that narrative. We do not show our commitment to our children by looking at how well we treat talented and privileged and gifted kids. Our commitment to children has to be expressed by how we treat poor kids, abused kids, neglected kids.

We have to change the narrative. We need to usher in an era of truth and justice; truth and reconciliation; truth and restoration. And I believe that our students and our institutions have to lead because we understand something about truth-telling and what comes after it. People are afraid, and because they’re afraid, they’re resistant; they’re reluctant. They just don’t trust what will happen if we acknowledge the problems, the histories, the harms.

I think we have to show them is that it’s all right to acknowledge wrongdoing. You can’t come to church and say, “I want salvation and redemption, but I’m not going to admit to anything. I’m not going to own up to anything.” Preachers are going to tell you that it doesn’t work like that. They’re going to say, “No, you have to confess and repent. And you shouldn’t fear confession and repentance, because confession and repentance opens your heart. It’s what allows God’s grace to fill you. It’s what leads you to redemption.” And our country has to have the courage to change these narratives.

I believe that when we don’t do the truth telling, we deny ourselves the beauty that is God’s justice, God’s mercy being shown on this earth. There is power in truth telling, and I am persuaded that there is something better waiting for us in this country. I think there is something that feels more like freedom, more like equality, more like justice that we have yet to experience. But I think people of faith are going to have to lead those who are worried, who are afraid, who are nervous about changing these narratives, and that is the way we will do God’s justice on this earth — by changing the narrative.