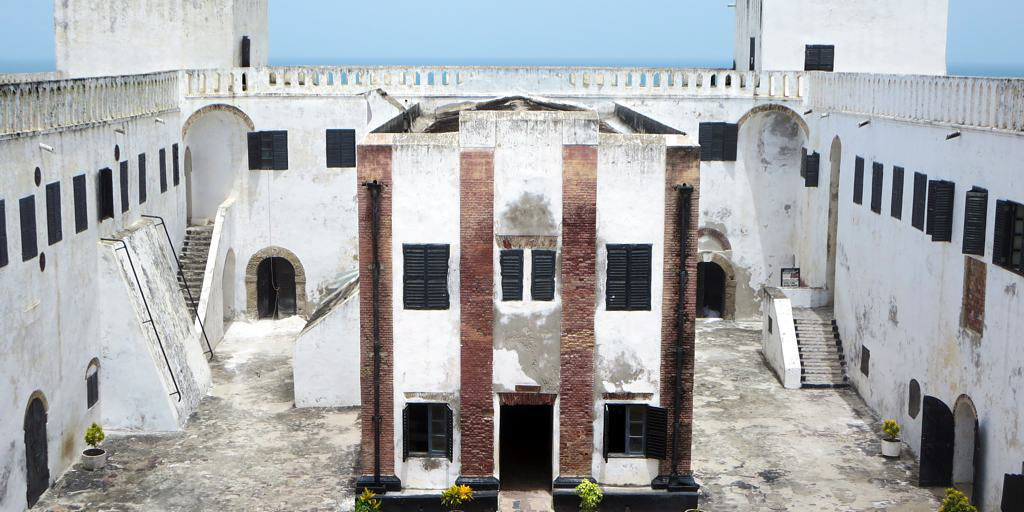 Wrestling with a Painful Past

On the coast of what is now Ghana sits Elmina Castle, the oldest European building south of the Sahara. First built by the Portuguese as a trading settlement in 1482, the bright white castle’s upper stories gave its residents grand views of the ocean and surrounding landscape. However, in 1500, the castle also became a key base for the transatlantic slave trade, first for the Portuguese and then the Dutch. From 1500 to 1814, as white residents continued with their daily lives in the main areas of the fort, captured Africans would languish in dungeons for weeks or months in dark, crowded, unsanitary conditions until they were brought through “the Door of No Return” to be loaded on ships heading for the Americas.

In the center of the Elmina Castle courtyard stands a church.

It’s a painful, breathtaking thought – that the first Christian structure in Ghana could stand literally in the midst of a stronghold of slavery and, more notably, that those who worshipped in that church had no care for those in the dungeons just hundreds of yards away. But, as Jemar Tisby writes in The Color of Compromise, “A survey of the history of racism and the church shows that the story is worse than most imagine.” The painful reality is that significant parts of Christ’s church were complicit in the horrific dehumanization and brutalization of slavery. More painful still is the reality that many of our brothers and sisters in the U.S. are still suffering from the ongoing effects of racism – and that, inadvertently or otherwise, we might be contributing to it.

It is painful, but we cannot ignore it. “Racial reconciliation requires the truth telling of the funeral dirge lament and the expression of grief,” Soong-Chan Rah writes in Prophetic Lament. And as recovery programs teach us, the first step is admitting the problem. But once the problem has been named, where do we go next?

There are a multitude of resources out there – the books I’ve named above are two – but we hope that for leaders at Christian colleges and universities, this issue of Advance can be another as they wrestle through the impact these realities have on campus and in the Christian community at large.

The road to overcoming the dark stains of our past – particularly for those of us who are white Christians – is not an easy one. While we might wish it otherwise, part of the difficulty stems from racism’s deep roots in the U.S. As Bishop Claude Alexander points out (page 22), the first enslaved Africans came to our shores more than 150 years before the U.S. would become a nation, and many of the legal barriers limiting African Americans were lifted less than 60 years ago. That’s a lot of troubled history with which to wrestle, and addressing it will stir up pain and hurts, old and new.

Thanks be to God, however, that we don’t walk through this alone. The benefit of being part of the CCCU is that we have colleagues and friends – family in Christ – who are committed to this same work across the country. To paraphrase Lamentations 3, there will be times reflecting on our history where we will remember “the bitterness and the gall” and our souls will be “downcast” within us; yet “this I call to mind and therefore I have hope: Because of the Lord’s great love we are not consumed, for his compassions never fail. They are new every morning; great is your faithfulness.”

Morgan Feddes Satre is the CCCU’s communications specialist and managing editor of Advance.