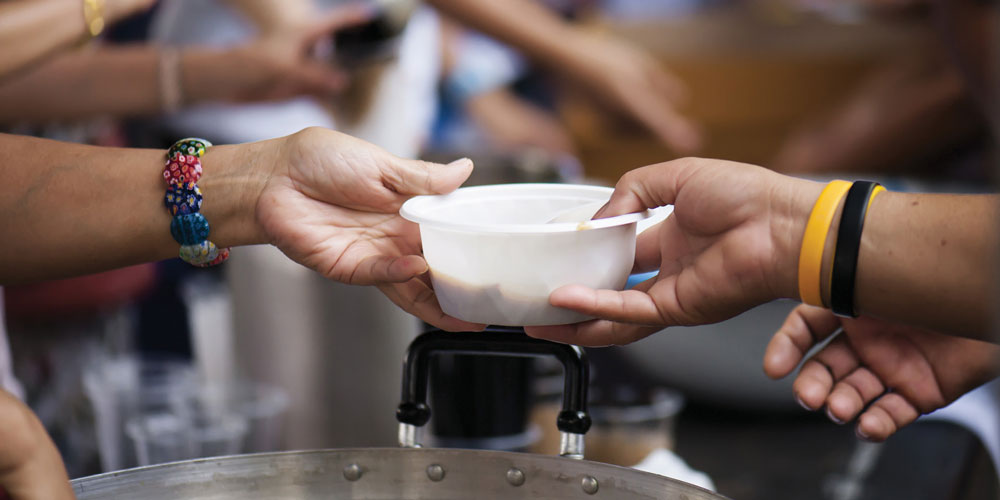 It’s a stereotypical image of life in college – that of a hungry college student. The idea is so common that it has become a comically perceived penance for obtaining a college degree. Did you really go to college if you didn’t eat multiple meals of Top Ramen?

The humor, however, can hide a dangerous reality: Students increasingly struggle with food insecurity.

Food insecurity goes beyond hunger. The United States Department of Agriculture (USDA) defines food insecurity as the lack of “access by all people at all times to enough food for an active, healthy life” due to insufficient socioeconomic resources. A 2017 USDA report noted the detrimental effects food insecurity can have on students, including:

Given the long-term impact these kinds of effects can have on a student’s educational outcomes and subsequent career goals, food insecurity is not something to take lightly. A recent report from the Center for Law and Social Policy found that nearly a quarter of students at four-year colleges battle food insecurity.

Though it is difficult to determine exactly how many CCCU students are facing food insecurity, it is most certainly a reality on CCCU campuses. An informal poll that included responses from more than two dozen CCCU institutions across the U.S. found that more than half of campus leaders were aware of some level of food insecurity among their students, and nearly half reported they had seen an increase of food insecurity over the last five years. So what can be done to address this hidden but growing need?

The Importance of Asking the Right Question

At George Fox University in Newberg, Oregon, campus initiatives to address food insecurity ramped up after a conversation with a student who could not afford the cheapest meal plan on campus, says Jere Witherspoon, who serves as the coordinator of the campus’s Bruin Community Pantry (BCP).

Officially launched last year, the BCP coordinates four different initiatives: a food pantry; four hospitality tables throughout campus that provide both food and information about other opportunities for students to get access to food; outreach services connected with the spiritual life office; and a new leftovers program coordinated with Bon Appetit, George Fox’s campus dining service, that gives students access to leftover food from that day’s cafeteria meals.

The numbers are already significant for a campus that serves about 2,400 undergraduate students. “In one day, we had 125 students come through the food pantry,” Witherspoon says. The leftovers program had 141 students sign up to receive services in one year. And according to a survey of the student body, the hospitality tables have quickly become one of the most prominent ways that the university has put its “Be Known” promise to students in action.

Witherspoon and her colleagues at George Fox quickly recognized the need for data from their students to better understand the scope of student needs on campus, so they sent out a survey. Of the 565 students who responded, 33% said they faced food insecurity.

Campus leaders at Baylor University in Waco, Texas, also recognized the need for solid student data in this area for their campus of more than 14,000 undergraduates. So as part of their annual survey that is sent to new students every fall to assess their transition to college and to identify potential red flags that may hinder student success, Baylor added a new question starting in 2017: “Are you able to afford three meals a day?” The survey found that on Baylor’s campus, anywhere from 9 to 15% of new students face some level of food insecurity.

Gathering that data is key because of the often invisible nature of food insecurity, says Michelle Cohenour, Baylor’s director of student success initiatives, who has worked in higher education administration for 18 years.

“Food insecurity is a hidden identity,” she says. “It is difficult to pull data on, as opposed to [something like] the percentage of first-generation students or another demographic.”

That unseen nature can also make it difficult to know exactly which students need food assistance. Thus, Cohenour and her team seek to “demystify the process” by informing students as early as the orientation process of food assistance opportunities on campus as well as other commonly used resources like tutoring services.

Among the resources Baylor provides students are a food pantry, known as The Store; campus fridges open for all students to use; Campus Kitchen, which provides a hot meal for students once a week; and the Texas Hunger Initiative (THI), a research initiative housed within the Diana R. Garland School of Social Work that strives to advocate on behalf of those experiencing food insecurity through policy advocacy and community and interdisciplinary collaboration. Students are taking advantage of these on-campus initiatives; in the 2018-19 academic year, for example, The Store had 4,492 student visits.

Another university that recognized the need to obtain data is Biola University in La Mirada, California. In 2018, Biola conducted a comprehensive survey of their undergraduate students’ basic needs. According to the survey, of the 717 students who responded, 68% have experienced food insecurity during their time at Biola.

The growth of such need is one result of increasing diversity within Christian higher education, says Meleca Consultado, Biola’s director the department of student enrichment and intercultural development. “The increased accessibility to college has opened the door to more diverse student populations. Now, the diverse needs of those students are being seen,” Consultado says.

Like George Fox and Baylor, Biola has developed a number of initiatives to meet the needs of its students, which are overseen and created by the Biola Basic Needs Committee that Consultado chairs. Such initiatives include the Biola Shares Pop-Up Pantry, which partners with local churches who have food banks and strive to provide healthy snacks such as fruits and vegetables to students; two food cabinets mostly stocked with nonperishables and sandwich ingredients; and a meal donation program, a collaboration with Bon Appetit hosting two weeks per academic year for students to donate meal swipes or money ($5 per meal). In 2018-19, 677 Biola students utilized the pantry, while 1,100 additional meals were donated.

The Importance of Leadership Support

As is true of any new campus initiatives, securing the support of senior leadership on campus is key to the success of any programs connected to fighting food insecurity. “You must have the support of the president and the board of trustees if you want to sustain [initiatives],” says George Fox’s Witherspoon.

Campus collaboration is also a key component, Biola’s Consultado says. “The best way an institution can address the basic needs issue of students is by doing it together. I cannot imagine any of our initiatives thriving by just one department.”

Understanding the needs of a specific campus is also important, as every institution has a unique situation for its students.

Thus, raising awareness about food insecurity research, understanding potential indicators of the issue (such as student socioeconomic class or knowing if students have one or more dependents), and listening to the students themselves via surveys or student panels can be helpful in creating a specific plan for meeting campus needs. It is also helpful to understand what external resources might exist for students, depending on their situations. Federal resources can help increase the level of sustainability for on-campus programs.

For example, some students may in fact be able to access the Supplemental Nutrition Assistance Program (SNAP), a resource that Baylor is working to make more accessible for its students, Cohenour says. In its own survey of student needs, Biola found that 17% of respondents were using some form of governmental program, but only 2% were utilizing SNAP for assistance in getting food.

While many students who attend college at least half time are generally not eligible for SNAP benefits, there are exemptions or opportunities to gain benefits for at least a couple months in certain situations, including:

Regardless of a campus’s approach to helping students address food insecurity, any assistance for students is more than just a meal, says George Fox’s Witherspoon. Students who face unaddressed food insecurity can often be disheartened, she says. “They feel as though they cannot continue pursuing a higher education. [We] can really tie retention and student success to food insecurity and basic needs.”

Baylor’s Cohenour agrees: “Food insecurity is an issue that affects students as a whole. It is a basic need,” she says. “It should be framed as a student success issue because it absolutely is.”

Though campus leaders might not be able to address every need right away, Cohenour says, it’s important to do what is possible: “If we see a need, we need to meet the need. Figure it out as you go, if necessary. We need to be the hands and feet of Jesus. This is what we are called to do.”

SHANNON QUE is a graduate student at Abilene Christian University and a 2019 recipient of the Center for Public Justice’s Hatfield Prize. Que and faculty advisor Dr. Stephen Baldridge received funding to research food insecurity among college students, from which some of the research for this article originated. Que’s report is available at sharedjustice.org.

Responding to a New Reality