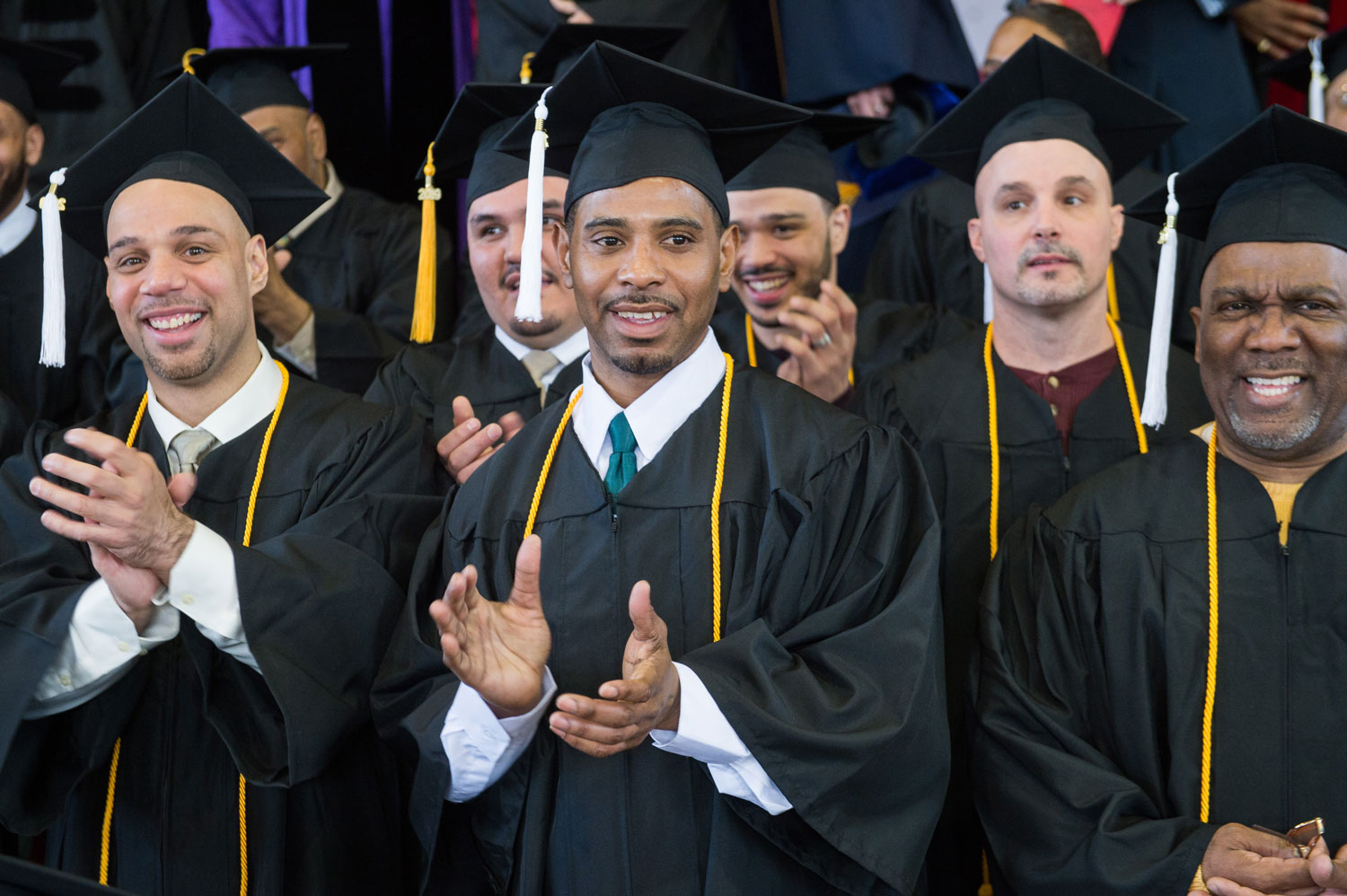 The Council for Christian Colleges & Universities (CCCU) has partnered with Prison Fellowship to promote Second Chance Month, a national effort to reduce barriers keeping formerly incarcerated Americans from reaching their full potential as they reenter society. In the wake of passing the FIRST STEP Act in December 2018—a significant accomplishment in criminal justice reform that promises a more just and rehabilitative federal prison system—the CCCU celebrates the inherent God-given dignity of all individuals and continues to implore lawmakers to end the ban on federal Pell Grants for students behind bars.

For the over 1.5 million individuals currently incarcerated in the United States in federal or state prisons, education can be a driving force in changing the trajectory of their lives and propelling them towards successful reentry into society following release. According to a new study by Georgetown Law School’s Center on Poverty & Inequality and the Vera Institute of Justice, only nine percent of individuals leave prison with a postsecondary education, although over 70 percent of incarcerated men and women desire to participate in an education program.

The benefits of educational opportunities are profoundly positive. A 2013 RAND study found that incarcerated people who participate in education programs are 43 percent less likely to recidivate, and 21 percent more likely to gain employment upon release. Prison education also saves taxpayer dollars. According to the Vera Institute of Justice, lifting the ban on Pell Grants for incarcerated individuals could reduce states’ incarceration costs by a combined $365.8 million each year. Additionally, every dollar invested in correctional education is estimated to save nearly $5 in reincarceration costs over three years.

“Extending higher education into our criminal justice system is an idea all of higher education can embrace because of the contribution to the common good,” shares CCCU President Shirley V. Hoogstra. “The positive effects for the prisoner, the prisoner’s family, and the wider community are well-documented. An education provides a fresh start. It gives individuals the confidence to face a new future and to look candidly at their past.

In Matthew 25:36, Jesus says, ‘I needed clothes and you clothed me, I was sick and you looked after me, I was in prison and you came to visit me.’ When a prisoner puts in the hard work to earn an education, the chances that upon release they will be able to earn a living, have healthier family structures, and invest in their community are significantly increased.”

“The President and 16 Governors have already designated April 2019 as Second Chance Month to raise awareness about the challenges people with a criminal record face and drive momentum for policy change,” shares Heather Rice-Minus, Vice President of Government Affairs for Prison Fellowship. “Prison Fellowship and the CCCU have made expanding Pell Grant eligibility to incarcerated students our organizations’ priority in Congress, recognizing that education is a key to unlocking second chances for men and women behind bars who dream of a better future.”

In the past year, the CCCU has continued to advocate alongside Prison Fellowship, the Ethics and Religious Liberty Commission, and the US Conference of Catholic Bishops to increase access to educational and faith-based programming in prisons and successfully aided the FIRST STEP Act being signed into law. The CCCU has signed onto numerous letters advocating for prison reform and continues to work to increase access to federal Pell Grants, including extending them to incarcerated or formerly incarcerated individuals through Second Chance Pell. A recent op-ed for The Hill coauthored by the CCCU’s Shapri LoMaglio highlights the need for restoring access to education behind bars, and CCCU president Shirley Hoogstra recently gave the commencement address for Nyack College at the Fishkill Correctional Facility. Numerous CCCU institutions also offer educational and professional opportunities to incarcerated and formerly incarcerated individuals.

Baylor University has been working for more than 10 years in collaboration with the Prison Entrepreneurship Program (PEP), which has pioneered innovative programs that connect the nation’s top executives, entrepreneurs, and MBA students with convicted felons. As a part of their programs, PEP participants become Baylor MBA students’ first consulting clients as they review their business plans and provide guidance, research, editing, marketing information, and more. The Baylor Institute for Studies of Religion has studied the program’s effectiveness. Their entrepreneurship boot camp and re-entry programs are proven solutions for preventing recidivism, maximizing self-sufficiency, and transforming lives.

Calvin Theological Seminary (CTS) began holding a few unaccredited seminary courses for inmates at Michigan’s Handlon Correctional Facility in 2005. Inspired by the results, CTS partnered with Calvin College and, in 2015, launched a fully accredited five-year program for prisoners who want to earn a bachelor’s degree in ministry leadership. The Calvin Prison Initiative (CPI) accepts a cohort of 20 students each year and offers degrees to inmates with life sentences, not only those who will be released. CPI believes education can transform prison culture from within by affirming the inherent dignity of all prisoners, even those who will not re-enter the larger society.

Greenville University (GU) has had an active relationship with the Greenville Federal Correctional Institution (FCI) since its creation in 1994 as GU faculty and staff volunteered in a number of roles ranging from directing plays and leading Bible studies, to conducting mock interviews and tutoring inmates enrolled in the prison’s GED program. A student club created under the leadership of professor Kent Dunnington not only raised awareness regarding the position impact of education on recidivism, but eventually led to the creation of the Greenville University @ Greenville FCI program, which offers classes for credit to incarcerated men and women in a blended format in which GU traditional students can study alongside female inmates.

Since the fall of 2017, Houghton College has worked in collaboration with Peaceprints WNY, a community-based organization, to offer an Associate of Arts program to those reentering society, providing them with invaluable tools as they reenter the workplace. While Houghton does not work within the walls of a prison, it is providing valuable opportunities to returning citizens with a second chance following incarceration by equipping them with the skills necessary for success as they rejoin society.

Lipscomb University not only provides educational opportunities for incarcerated individuals in prison, but traditional students (“outside students”) as well. Traditional students can enroll in classes held on-site at the Tennessee Prison for Women and study alongside residents of the prison. In December, 10 women will have earned their BPS degree and 19 will have earned their AA degree since the inception of the Lipscomb Initiative for Education (LIFE) program in 2007. In the summer of 2018, the Hazelip School of Theology started the first seminary in a woman’s prison in the country, offering a Master of Arts in Christian Ministry with an emphasis in Spiritual Care to 11 women who are residents of the prison and five students who do not reside inside.

North Park University has launched a Master of Arts Degree in Christian Ministry at Stateville Correctional Center with a vision to prepare people for ministry in contexts that are susceptible to violence. They offer traditional seminary courses as well as courses on conflict transformation, race relations, transformative justice, and trauma. The program has enrolled 37 incarcerated individuals and one free individual, and North Park also allows their local campus students—both seminary and undergraduate— to enroll in individual courses at the correction center. In October of 2018, North Park and the Stateville Correctional Center also welcomed Grammy nominated artist Lauren Daigle to perform for and with the incarcerated individuals.

Nyack College is one of 67 colleges and universities selected in 2016 from a pool of 200 institutions vying to participate in the U.S. Department of Education’s Second Chance Pell pilot program. Nyack has advocated for higher education in prison since the late 1990s when federal budget cuts eliminated many programs. In 2001, 20 Sing Sing inmates completed the College’s Bachelor of Science degree in organizational management. The Second Chance Pell has strengthened the expansion of Nyack’s programs. Remarkably, the recidivism rate is 0% for Nyack students compared to 40% for the New York State correctional system. In March 2019, a commencement ceremony was held at Fishkill Correctional Facility for 26 men who earned the Bachelor of Science and 30 who earned the Associate of Arts degrees with CCCU President Shirley Hoogstra as the commencement speaker.

The Ministry Training Institute of Samford University currently offers two non-credit diplomas to inmates at Aliceville Federal Correctional Institution and Hamilton Aged and Infirmed State Correctional Facility.  Each academic year, the university works to plan and implement courses in the areas of New Testament, Old Testament, theology, spiritual disciplines, and apologetics. Between the two facilities, over 450 inmates have taken classes, and earlier this fall, a new educational track launched specifically for Hispanic inmates in Aliceville. The university has also sought to educate the public about prison reform through the creation of their new play, The Prisoner’s Friend, which highlights the life of John Howard, who dedicated his life to prison reform.

TIU-Waupun is a collaboration between Trinity International University and the Wisconsin Department of Corrections to operate a Trinity location within Waupun Correctional Institution. This effort provides a Bachelor of Arts in Biblical Studies program for inmates serving either many years or life sentences. The curriculum requires at least four years of study.

Joel Whiteside, a graduate of Warner Pacific University, was propelled by his own life story to create a nonprofit organization to support formerly incarcerated individuals. After witnessing the gripping realities of those stuck in cycles of incarceration and addiction, Whiteside founded the organization Been There, Done That to aid those who are reentering society following incarceration, offering inspiration, hope, and a future to many through educational mentorship and vocational training.

Though Wheaton College does not have a formal prison education program, they are actively training volunteers for involvement with correctional ministries. Wheaton’s Institute for Prison Ministries (IPM), not only offers world-class training for Christians serving in correctional facilities, but also is a source for cutting-edge resources for Christians working to influence the criminal justice system and support incarcerated individuals. Since 1987, IPM has granted more than 65 scholarships, named after Charles W. Colson, to formerly incarcerated persons to attend Wheaton College for an undergraduate or graduate degree or a certificate in correctional ministry. Dr. Karen Swanson, Director for the Institute for Prison Ministries, recently published an insightful article, Making Grace Visible: Reflections on Our Calling, in Christianity Today inviting Christians to make grace visible around us and spend time with the marginalized.

York College is working in collaboration with the Nebraska Correctional Center for Women to provide an opportunity for cohorts of 12 women to take college courses while incarcerated, with the goal of completing an Associates of Arts degrees in 3.5 years. The first cohort will graduate with their degrees in August, and plans are underway to select the second cohort.