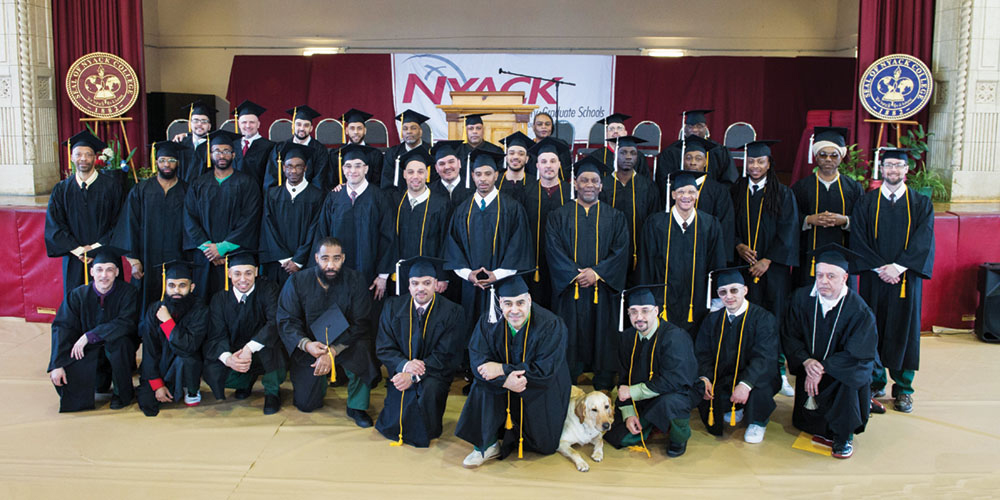 Efraim looked so sharp with a pressed shirt and a tie under his graduation robe. A fresh haircut under the graduation cap with the gold tassel. His dress and demeanor signaled a special occasion. And this was a special occasion set in a sunlit, albeit small, gymnasium. This gymnasium had seen many a basketball game, but it had also seen many other gatherings because it was the one place at this institution that could hold the right amount of people. The room was filled with anticipation. The joy and excitement were palpable. As I went around the room introducing myself and learning the names of Efraim and his fellow graduates, I saw that their happiness matched that of students at other commencement ceremonies I had attended.

I’d been invited to give the graduation address. I was looking forward to it and had prepared well because I was given only 8 minutes, which can be as difficult as 30 minutes. But still, I was somewhat nervous. Would my remarks resonate with my audience of graduates and their special guests? This graduation was different than the others I’ve attended: These graduates were inmates of the Fishkill Correctional Facility in the small town of Fishkill, New York.

Fishkill Correctional Facility is home to approximately 1,650 men. The average age is about the same as that for other adult learners: 35 to 40. It is a medium- to maximum-security prison facility with a mental health unit and senior care, including hospice care. The assistant deputy commissioner of prisons says that the day the men enter Fishkill, they also begin the first day of their journey to release. That release could be longer or shorter based on how they decide to live under the supervision of the department of corrections of New York State.

This is an institution with a “student conduct code” of a magnitude unknown to most of our higher education institutions. The men are counted around five times a day, and if the graduation ceremony is not given special dispensation, it will stop, the men will stand up, and they will line up against the wall to be counted. Each counting reminds them that they are not free; that they are deemed untrustworthy and a flight risk; that they are under the absolute authority of prison guards. This is not an easy mental state to endure, even when brought about by one’s own actions.

But this prison also values preparing men for their future release into a law-abiding life. To that end, the prison provides classes on anger management, parenting, counseling, addiction recovery, and paralegal training, to name a few. Fishkill’s leaders also value providing their residents (as they call them) with educational opportunities.

What is it like for these 56 inmate students of the Nyack College prison education program to see their college president, vice presidents, faculty members, college professional staff, and two invited speakers – all in academic regalia – greet them with the exuberance fitting the occasion? What is it like to line up to proceed down the center aisle of the auditorium to the singing of the Nyack Gospel Choir? What is it like to see seven state correctional leaders front and center on the stage giving them greetings and words of congratulations as if they are not the men who line up on the wall but men who belong to a community of achievers? What does it feel like to be publicly respected for their behavior? What does it feel like to have your name – not your number – called out over the microphone in front of your family members as you get that associate or bachelor’s degree?

It feels like new life. It is a resurrection of sorts.

When Christian higher education spends precious budget resources on incarcerated persons, we are living out the command of Matthew 25. In many ways, providing an educational opportunity for an imprisoned individual fulfills all of the provisions – it provides food, clothing, presence, counsel, encouragement, engagement, and identification with the poor and outcast. It promotes their wellbeing and gives opportunity for a future when they will not be hungry, naked, thirsty, lonely, or down and out on their luck, because they have achieved an education.

Jeremiah 29:11 is always popular at graduations because it speaks to a fresh, unfettered future of dreams. But because it was written to a captive people in exile, it applies equally to a population whose dreams have been crushed and for whom life has been gritty: “I have plans for you, plans to prosper you and to give you hope and a future.” When the faculty and staff of a Christian college take the long drive to an institution made up of buildings surrounded by barbed wire, they make a hope and a future possible.

When Jesus sent out his 12 disciples, he instructed them to raise the dead (Matthew 10:8). We tend to have a certain incredulousness about that prophecy. We know it is true because of stories of resurrection like Peter raising Dorcas (Acts 9:36-42) or Paul raising Eutychus (Acts 20:7-12). But it is also, in my opinion, true today when we touch the lives of the men and women who have made dark choices and stalled their futures. When we bring the potential of hope and help them succeed, it is resurrection – going from death to life because of the love, grace, and power of Jesus Christ.

Shirley V. Hoogstra is the president of the CCCU.