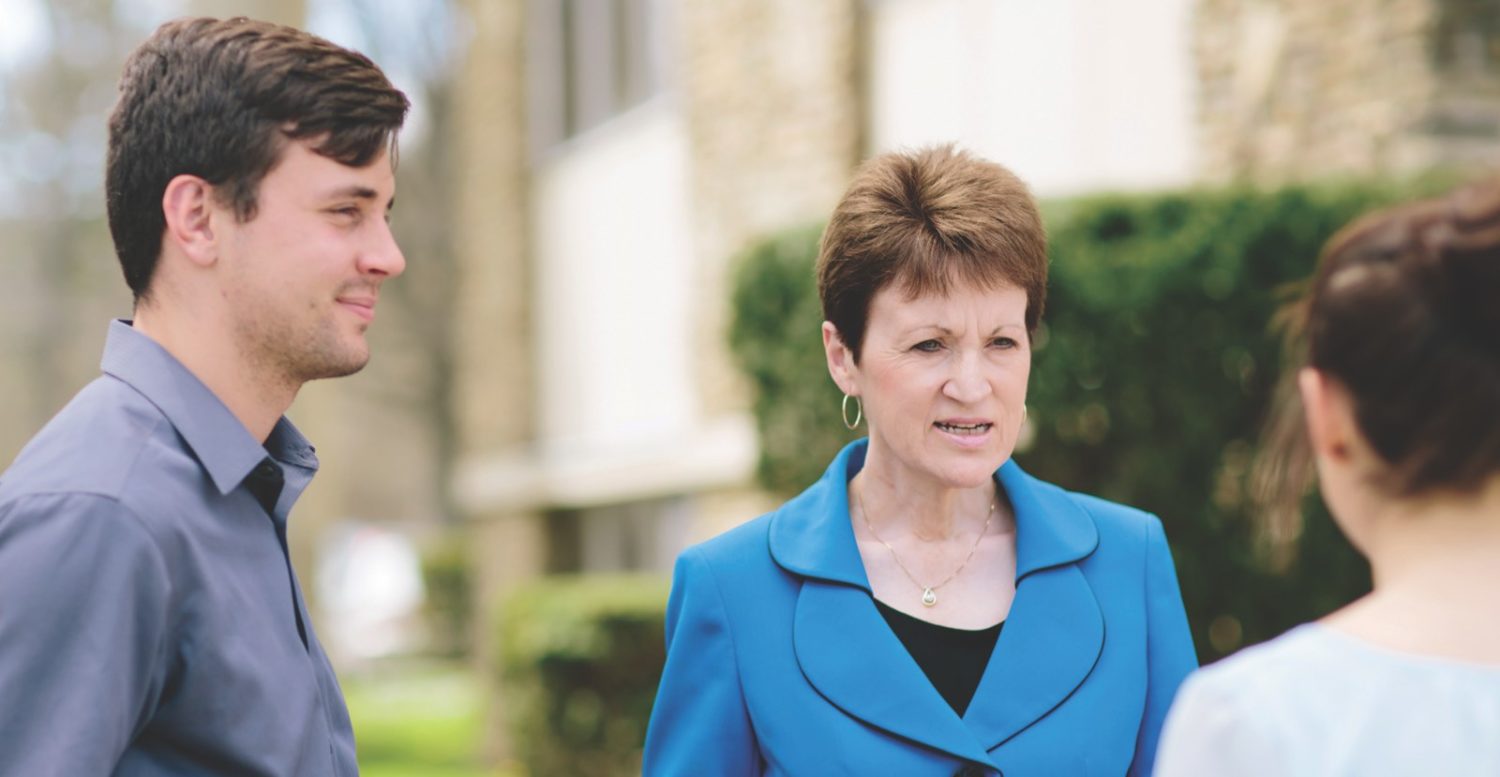 Whether we grew up in Sunday School or not, most of us have biblical heroes. For one reason or another, their particular stories speak to us in ways that are specific to our journeys. They inspire us, call us to account, and remind us of God’s faithfulness even in the most impossible of circumstances.

If we were choosing official biblical heroes for Christian higher education in this moment, I would nominate Daniel, Joseph, Esther, and Paul. Their stories stand out as models both for the world into which we send today’s graduates, and the kinds of graduates we ought to prepare for that world.

Our world, in many respects like the worlds of ancient Babylon, Egypt, Persia, and Rome, is a place where God’s children are not necessarily among the privileged majority. Like those societies, our world is skeptical of established religion; a world of multiple faiths, diverse ethnicities, competing truth claims, political intrigue, international instability, socio-economic inequity, war and violence, fear and hopelessness. The most powerful people shape the “truth,” and the “news” is whatever can be made believable to a listening public. Or so it often seems.

This is not the way it was supposed to be. An essential element in the original 18th-century American political experiment was a commitment to the risk of pluralism. At least at the theoretical level, the founders of this country dared to believe that out of difference could come unity – not an imposed unity, but a unity emerging through the free exchange of ideas among human beings endowed by their Creator with the gifts appropriate to this task. It was a radical – indeed revolutionary – set of ideas. Rarely, if ever, in history had humans believed that people of deeply different worldviews could live in one polity in peace and on equal legal footing. But that was the vision: a confident, responsible, and generous pluralism. There was no sense that difference of opinion, even on one’s most fundamental convictions, need stand in the way of political unity and civility.

It should be noted that 18th-century America, when compared with 21st-century America, was relatively homogeneous, and the founding documents did not reckon fully even with the significant diversity that existed at the time. It was certainly more comfortable to be of the Protestant or Anglican traditions than the Roman Catholic or Anabaptist traditions. Neither the First Nations nor African American populations were counted as an equal part of the new national community in the original vision. Those who “counted” in practice were mostly men, mostly white, mostly of British or European descent, and mostly Protestant. There was one sacred text and one moral vision. The theory of pluralism is easier to espouse when everyone who counts in practice is virtually the same.

Meanwhile, 21st-century America is home to countless ethnicities and adherents of all major religions of the world, as well as to no religion at all. Additionally, the various identities of gender and sexual orientation that were hidden under the umbrella of personhood in the 18th century have become visible as independent identities. The Judeo-Christian and classical foundations that united the citizenry of 18th-century America are no longer common ground today.

All too often, fear replaces hope as we face these new realities. Rather than embrace the generous pluralism provided for by America’s founders, our society has splintered and polarized. On the one hand, there is a vision of America grounded in a triumphalist Judeo-Christian framework. On the other, there is a secular vision where fundamental moral and spiritual values are privatized and the public square is left with a truncated vision of truth, grounded in rationalistic and scientific “facts.” (For a full exploration of this development, see Robert Putnam’s American Grace: How Religion Divides and Unites Us, 2010.)

Yet that original, risky vision of pluralism still stands. In this fear-filled moment, we need a renewal of hope in the possibility of a flourishing society where profound differences of opinion are compatible with civil dialogue, graciousness, humility, and mutual respect. Indeed, we need a renewed vision of human flourishing that values the differences of opinion as essential if finite and fallen human beings are to come to the richest possible understanding of their world.

In this moment, graduates of CCCU institutions – like Daniel, Joseph, Esther, and Paul – have something distinctive to offer. Like these biblical heroes, graduates of CCCU institutions have been nurtured in a context where their core identity is grounded in their uncompromising loyalty to God, and where they are prepared with the competence, skills, and sensibilities required to move into positions of leadership and redemptive influence in the larger culture. They are in the best position possible to be agents of hope in the midst of these turbulent, restless, uncertain, and fearful circumstances. There are several reasons for this.

First, in CCCU institutions, we have never given up on the idea that there is a transcendent truth about reality against which all other truth claims are to be evaluated. We believe that there is a truth that transcends all cultural perspectives and identity politics, standing over and against all the narratives about reality constructed from a partial view of the way things are. In short, we have not adopted the dominant postmodern paradigm of the contemporary academy. Rather, we continue to affirm the classical Christian belief that truth is grounded not in abstract reason, scientific experiment, or power, but in the loving life and work of Jesus Christ.

Second, at CCCU institutions, we believe that this truth is revealed to us through nature, through reason, through experience, through God’s biblical revelation, and through the work of the Holy Spirit. We never accepted the Enlightenment belief that the only reliable truth claims are rationalistic and empirical. Thus, in CCCU classrooms, we have not divided truth claims into objective universal truths and subjective privatized truths. We are comfortable wrestling in our classrooms with a variety of kinds of truth claims and spending our energy sorting out which kinds of truth are most appropriate for responding to various kinds of human questions. We also recognize that, because of our fallenness and finiteness, all of our particular explorations will be partial and incomplete. Thus, we can be confident of the reality of ultimate truth, but graciously humble about our own particular grasp of that truth at any moment.

Third, we believe that truth is ultimately personal, rather than abstract. The truth that changes human beings for good arrives not through rationalistic syllogisms or mathematical formulae but embodied in persons. While syllogisms and formulae are important and powerful, it is not until they are connected with redemptive purposes, constructive moral values, and sacrificial love that they can be relied upon to bring healing to the world. Truth, in other words, is incarnational. Just as God revealed himself to this world in the person and work of Jesus Christ, so we must embody truth.

Fourth, we believe that ultimate truth is revealed not in power but in humility and even vulnerability. At CCCU institutions, after the model of Jesus, we prepare young people to pursue truth not so they can wield it over their fellow human beings, but so that they are better prepared to love and serve them.

Finally, we believe that convincing others of truth is the work of the Holy Spirit, not us. We are called to be witnesses to the truth; we are not in charge of making sure that others believe it. This applies whether we are engaging in a political argument, presenting a professional paper, or sharing the Gospel of Jesus Christ. Our job is not to “win” arguments, but to present the truth as clearly as we understand it and to ensure that our lives bear out its transformation with integrity. This freedom allows us to disband our egos and to witness to the truth with grace.

It is no accident that our Lord told his disciples that it would be their love for one another – not their eloquence nor their logical arguments – that would convince the world of the truth (John 17). The test of the truth is the quality of the communities it creates.

Like Daniel, Joseph, Esther, and Paul, graduates of CCCU institutions know who they are in God. They are not looking to the culture for approval or validation. They do not confuse this cultural moment or our particular society or nation with the Kingdom of God. They are not tempted to think that our primary responsibility is to protect our way of life or to ensure that everyone agrees with it. They take for themselves Jeremiah’s admonition to the Jewish exiles in Babylon that we should pursue the flourishing of the communities in which we find ourselves, for in their flourishing we will also flourish (Jeremiah 29). They know that God has gifted them with skills and capacities that can be of value to the larger world of human beings who continue to be the object of God’s creative and redeeming purposes.

In this moment, when it is tempting to use our constitutional prerogatives to guard our own liberties, may we in the CCCU choose deliberately and in the name of the Gospel to invest ourselves in creating the conditions where the Holy Spirit can be at work in every arena of culture and society, turning our divisions into sources of constructive richness and complexity, and transforming our fear into hope.

Shirley A. Mullen is the president and a professor of history at Houghton College in Houghton, New York.

Talking in a Different Tone