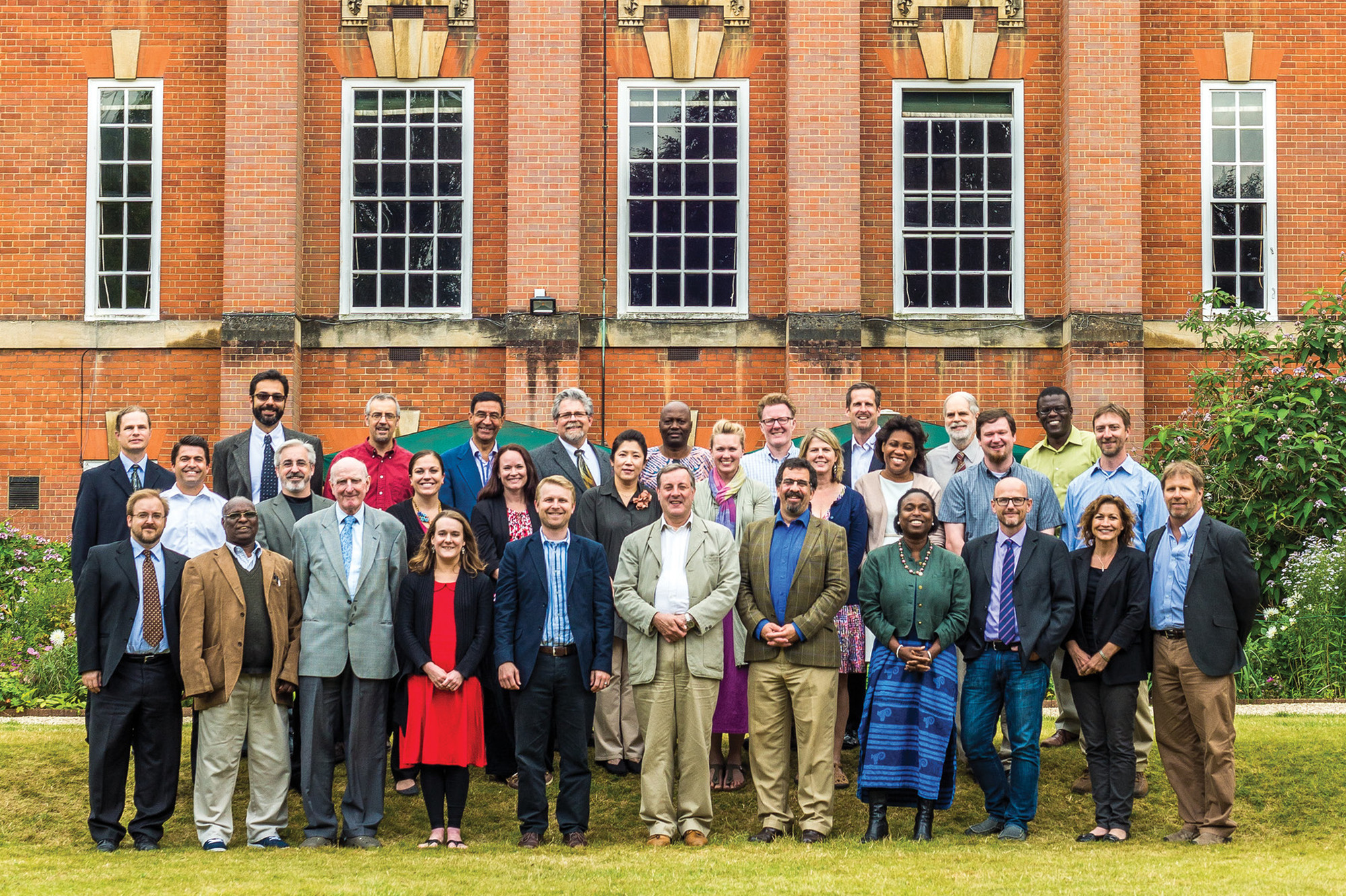 “Artificial minds and the image of God.” “The interface between African Christianity, African spirituality and science.” “The science of Christian virtue.” “Measuring the development of college students’ perceptions about faith and science.”

These are just a handful of the topics that 25 participants researched over the course of the past two years as part of Bridging the Two Cultures of Science and the Humanities, the latest science and religion research endeavor from Scholarship & Christianity in Oxford (SCIO), the UK subsidiary of the CCCU.

Made possible by a grant from the Templeton Religion Trust, the project’s goal was to develop participants’ interdisciplinary skills in science and religion. Prior to the project’s launch, the SCIO staff conducted an extensive study (“Balancing Perspectives,” funded by the John Templeton Foundation) to determine the best ways to achieve a lasting impact on CCCU campuses – not just for the faculty involved, but for their students and for their administrators as well.

“Armed with that data, we planned a seminar focused not only on the research needs of the faculty – which is of course vital – but also the ways to enhance activity on CCCU campuses that would encourage faculty in their work and help students and senior campus administrators to understand the central issues and substantial opportunities that science and religion discussions pose,” says Stan Rosenberg, SCIO executive director and the project director of Bridging the Two Cultures.

Theologians, philosophers, and social and natural scientists from around the globe met for a month each summer in 2015 and 2016 amongst the rich historic venues of the University of Oxford, where they participated in workshops, spent time working on their research, and were individually mentored by senior scholars in the field.

In addition, participants had the opportunity to hear lectures and interact in extended question-and-answer sessions with eminent scholars such as Alister McGrath (Andreas Idreos Professor of Science and Religion and director of the Ian Ramsey Centre at Oxford), David Livingstone (professor of geography and intellectual history at Queen’s University Belfast), Elaine Ecklund (professor of sociology at Rice University and founding director of the Religion and Public Life Program), and John Hedley Brooke (Andreas Idreos Professor Emeritus of Science and Religion at Oxford).

“I have been profoundly impacted by the personal encounter with top scholars who understand their intellectual work also as a spiritual calling,” says Carlos Miguel Gómez, research professor and director of the Centre for Theology and Religious Studies at Universidad del Rosario in Bogotá, Colombia. “Their example has given me inspiration and strength, and at the same time I have been introduced to new, exciting fields of research.”

Hans Madueme, assistant professor of theological studies at Covenant College in Lookout Mountain, Georgia, says the decision to take up the opportunity to be part of a science and religion seminar with other scholars outside his own discipline was a “no-brainer.” After all, such experiences are hard to find.

“In science and religion, I think many professors whose expertise lies elsewhere are intimidated by the field. They’re aware of controversies and debates but feel unqualified to speak into them in any professional capacity,” he says. “Such seminars [like Bridging the Two Cultures] help address this problem.”

Interdisciplinary study has repeatedly proven to be an effective tool in the science and religion seminars that SCIO has held over the years, Rosenberg says.

“Disciplinary concerns and institutional structures in higher education often discourage interdisciplinarity and reward narrow specificity,” Rosenberg says. “However, our research has shown that some educational institutions – like those in the CCCU – are less marked by these narrow disciplinary divides or silos. We have therefore seen that our institutions provide

For April Maskiewicz, associate professor of biology at Point Loma Nazarene University in San Diego, California, the relationships she formed with colleagues working in such fields as chemistry, philosophy, cognitive science, psychology and earth science have greatly enhanced her own understanding of science and religion.

“I realized that I have such a small part of the conversation,” she says. “[Bridging the Two Cultures] deepened my understanding of all these academic areas of study and showed me the critical role they play in helping science and theology create a bridge.”

Part of this bridge-building requires scholars from other global contexts, which is why the seminar staff made it a priority to include scholars from outside North America, Rosenberg says. “Within science and religion are many wide-ranging issues with global impact, from climate change to questions of justice to human enhancement, so a wider engagement is necessary, as the West desperately needs the benefit of engaging such troubling issues from a wider perspective.”

For Bernard Boyo, dean and professor of Bible and theology at Daystar University in Nairobi, Kenya, the seminar provided the opportunity to study a topic very close to home: ethnomedicine and faith-based healing among the Maasai community.

“My research sought to integrate science and ethnomedicine to ascertain the use of ethnomedicine as a valid healing method,” he says. This was a way of “affirming the majority of people who are not able to access medical facilities but have traditional cultural knowledge on the use of readily available materials at their disposal to get a remedy for their ailments.”

Working and studying alongside other scholars who are also pursuing deeper understanding and integration of science and religion was deeply encouraging, Boyo says, “particularly in my own context where the Christianity being practiced seems to put into disrepute any matters of science that are in contradiction to faith.”

A unique and intentional aspect of Bridging the Two Cultures was the emphasis on bringing students into the discussion and including some of them in the research. Participants were given funds to start science and religion clubs on their campuses and to hire students to assist in their research.

“For our campuses to participate in the global market of higher education, they need to be engaged in current approaches to best practices in learning, which includes a focus on student-oriented learning and undergraduate research in particular,” Rosenberg says. “The project’s commitment to providing research assistants helps the faculty accomplish more, provides rich training for future leaders in the field, and spreads the conversation out to the broader community of students who participate in club activities.”

At Point Loma Nazarene, Maskiewicz says the seminar’s interdisciplinary focus has already made an impact in her classes – particularly those where she teaches about origins. “I teach evolution at a Christian university, so [the interaction between science and religion] is already something we address throughout the course. But now I can bring in other disciplines to bear on this,” she says. “I can talk about the history of science and the understanding of what science is and what science is not. … I already knew all of that at a superficial level, but I’ve gained a much better understanding about that [through this seminar].”

Madueme says that the new science and religion club he’s advising on Covenant’s campus has already resulted in great discussion. “[The club] has produced a rich context for thinking about complex issues relating to science and faith – a context where we press into the hard questions with vigor and passion,” he says. “I think the students love our club meetings and the opportunity for us to sharpen our minds together as fellow pilgrims.”

That enjoyment of discussion and discovery has spread beyond the student clubs. In Bogotá, Colombia, Gómez says the support given to him has enabled him to gather with not only students but also colleagues from other nearby universities.

“I managed to organize a group of faculty and students from different universities who meet every two weeks to study and discuss key issues in science and religion, so this is now a relevant topic in my context,” he says. “[Additionally], we organized a couple of academic events with international guests, which have greatly strengthened the dynamics of our group.”

Students from the participants’ home campuses were not the only ones to engage with the project. At the end of the seminar’s 2016 summer meeting, nearly all of the presidents of the participants’ institutions traveled to Oxford for a three-day roundtable. The gathering included a series of lectures by Alister McGrath and David Livingstone, a performance and accompanying panel discussion of the play Mr. Darwin’s Tree, and panel discussions where both presidents and participants could explain what they wish the other party knew about their respective concerns on science and religion.

“In order for the kind of thoughtful, engaging and challenging research that happened over these past two summers in Oxford to continue successfully on CCCU campuses, there needs to be a deep relationship between these faculty members and their presidents, as well as a solid understanding of the challenges and opportunities each party sees in their work,” says CCCU President Shirley V. Hoogstra, who convened the roundtable. “The presidents’ roundtable provided that exact opportunity to begin the development of those relationships, and they were a tremendous success.”

“We are delighted that plans are in motion for SCIO to host another seminar, which gives us the opportunity to advance these important conversations and research opportunities that examine the interwoven relationship between science and religion and the world-impacting issues that they directly shape,” Rosenberg says.

Though the format will remain largely the same as the first Bridging the Two Cultures, Rosenberg says there will be a number of minor changes to help fine-tune the project:

In addition, Rosenberg says plans are underway to host a colloquium in North America, sometime in the spring of 2019, that will bring participants from both cohorts of the seminar together with key influential leaders from their campuses who work with faculty and students on academic and pastoral matters, such as provosts, student development

“Our goal for this colloquium is to provide an opportunity to help faculty and these key stakeholders develop understandings for addressing science and religion concerns on campus, as well as enhance their support of each other,” Rosenberg says.

Announcements about the new seminar will be posted to the CCCU website by spring 2017. For more information, contact editor@cccu.org

Morgan C. Feddes is the CCCU’s communications specialist and managing editor of Advance and eAdvance.